This month we would like to recognize Esther Arias Garcia, Housekeeper at the Hampton Inn Milwaukee/Brookfield, for demonstrating Aileron’s core value of “Innovative.”

Esther has been a staple at Hampton Inn Brookfield for over 20 years. She loves what she does and it shows in her work daily. With the hotel being short staffed lately Esther is always willing to come in to help clean extra rooms, ensuring that the hotel has the optimal number of rooms to sell for the night. She wants this hotel to succeed, and it shows in her work and the extra mile that she is willing to go. You always can tell what rooms Esther was assigned for the day because you will see her amazing towel art placed in her rooms. That is one of those extra touches she gives to make sure that we outshine the other hotels in our market. She takes pride in her work, and it shows in the surveys that come in to our property. We are very lucky that Esther loves this hotel as much as we love her.

Review left by a guest: “Esther made the weekend here amazing! She was a god send. You’re very lucky to have her as an employee.” 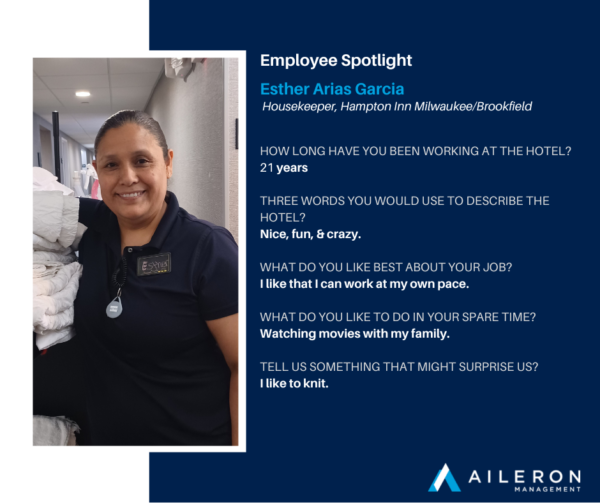